Chabako (Tea-Box) is a traditional Japanese hand-made box made out of Japanese Cedar, used to preserve and transport tea leaves since the late Edo period (1800s). Inside is lined with tin for protection against humidity, insects and oxidation.
Today, the usage of Chabako has changed. Chabako gave way to aluminum packaging and carton boxes as the storage/carrier of tealeaves. However, due to its notable functionality, chabako is now used as the storage means in various different fields. Clothing such as kimono/obi, delicate items such as jewelry, albums, dry food (tea, coffee, rice, pasta, etc.), sensitive gadgets such as antiquities/watches/cameras. Chabako is as good a storage box as any other, if not better.
Its sustainability and the ecological quality are also as relevant today as ever. The Chabako used by the Interior Chabako Clorp. is made in the province of Kawane, a renounced tea production district, in Shizuoka Prefecture. The wood used is mostly above 30 years old and are first exposed to wind and rain for at least 3 months. This will strengthen the wood against volatile climate of Japan. Then, it is soaked again in water and placed under compressor and flat-dried completely. Once the wood is prepared, finally it is meticulously crafted into Chabako by the hands of seasoned craftsmen.
Sadly, as many other traditional craft industries, there is a serious decline in both demand and supply. The surviving craftsman of Chabako counts only 6 in all Japan as of June 2019. 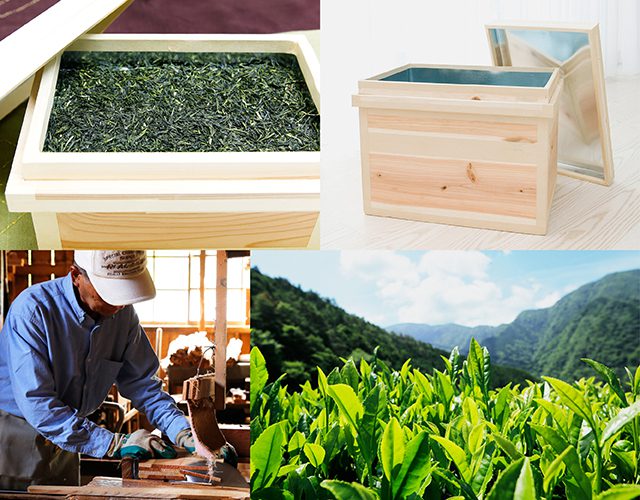 Fabric-covered Chabako was said to be created by foreigners living in Japan in mid-1950s, who initially had their eyes on the specific characteristics of Chabako. Then, mimicking chests and ottomans, they started to cover Chabako with Japanese traditional fabrics to create the beautiful ornamental furniture.
Foreign community here was familiar with chabako because the overseas moving companies used to use chabako to ship items across the seas. Back in the days when the storage conditions of ships were not as sophisticated, chabako acted as an ideal storage/carrier box.

Interior Chabako is a registered brand name of evolved form of fabric-covered chabako. It is specifically tuned for aesthetic appeal and ease of use for the consumers. Not limited to the Japanese style, Interior Chabako boasts a whole range of styles from all over the world.
Interior Chabako collaborates with designers from different fields such as clothing and lux fabric brands in and out of Japan, and at the same time, use casual interior fabrics to cater for a variety of customer needs.
There are 20 different sizes of Interior Chabako; they vary from one that could be placed on top of a table to one as large as a bench. The larger Interior Chabako is strengthened to withstand a full-grown adult’s weight. Hinges, legs, and casters can be put on Chabako to improve ease of use and the inside of the lid can be customized to have messages and logos etc. fixed into it, making it a great fit as a present or memento.
From 2015, Laser-etched Chabako is introduced. Custom designs can be easily made, and it caters for the consumers who enjoy the texture of wood itself. It also allows chabako to be more accessible for a larger quantity of people.
Recently, Interior Chabako has served as a medium for many different kinds of traditional Japanese crafts, such as the Yuzen dye, and created a new path for spotlight for these declining arts. In 2015, Interior Chabako participated in Japan Expo in Paris. In 2017, small Interior Chabako using Braqunie's Toile de Jouy had been exhibited in the Musee de la Toile de Jouy in France, both marking its debut outside of Japan. 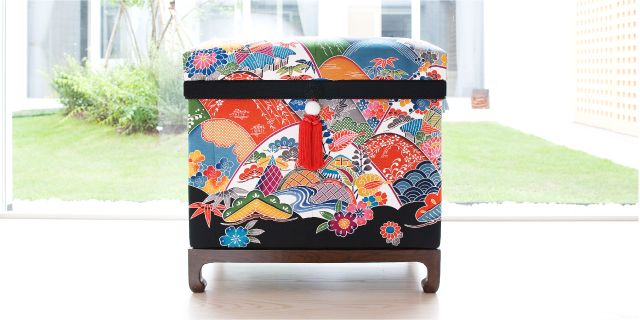